PRIDE, PREJUDICE, AND OTHER FLAVORS 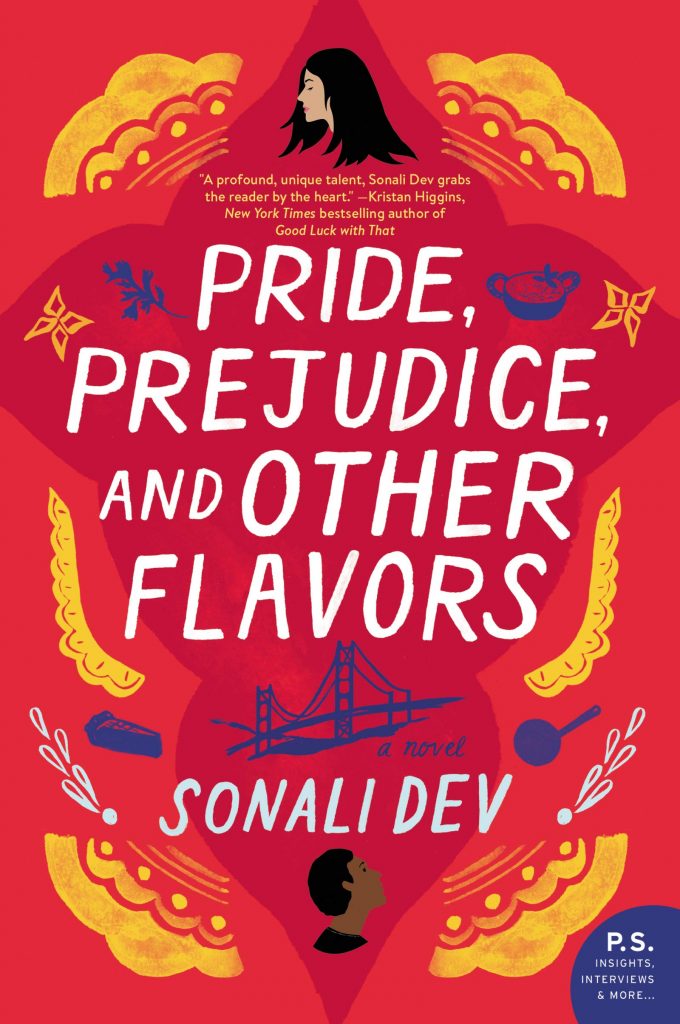 Award-winning author Sonali Dev launches a new series about the Rajes, an immigrant Indian family descended from royalty, who have built their lives in San Francisco…

It is a truth universally acknowledged that only in an overachieving Indian American family can a genius daughter be considered a black sheep.

Dr. Trisha Raje is San Francisco’s most acclaimed neurosurgeon. But that’s not enough for the Rajes, her influential immigrant family who’s achieved power by making its own non-negotiable rules:

·       Never do anything to jeopardize your brother’s political aspirations

Trisha is guilty of breaking all three rules. But now she has a chance to redeem herself. So long as she doesn’t repeat old mistakes.

Up-and-coming chef DJ Caine has known people like Trisha before, people who judge him by his rough beginnings and place pedigree above character. He needs the lucrative job the Rajes offer, but he values his pride too much to indulge Trisha’s arrogance. And then he discovers that she’s the only surgeon who can save his sister’s life.

As the two clash, their assumptions crumble like the spun sugar on one of DJ’s stunning desserts. But before a future can be savored there’s a past to be reckoned with…

A family trying to build home in a new land.

A man who has never felt at home anywhere.

And a choice to be made between the two.

“With humor, insight, and culinary descriptions so rich the tantalizing aromas practically waft from the pages, Dev’s latest draws readers into a tangled world of class, cultural, and political issues in a delicious riff on Pride and Prejudice.” – Library Journal, STARRED Review

“Vivid and deliciously enticing, Dev’s storytelling is layered with emotional depth.. a flavorful harmony of cross-cultural unions, familial love, and an entertaining ensemble of characters that will leave readers with a serious craving for more.” NPR

“I don’t know what I loved the most about Pride, Prejudice, and Other Flavors. Was it how well Sonali Dev writes about family ties and how meaningful and painful they can be? Was it how passionate and dedicated her characters were for their chosen careers? Was it the fully realized love story between two complicated and sympathetic people? Or, my goodness, was it the food descriptions, which had me swooning? I can’t choose: all of these things came together to make a truly wonderful and joyous book.” – Jasmine Guillory, New York Times Bestseller

“This book kept me up till 3am. Sonali writes characters who are complicated and passionate individuals with vivid emotions – sometimes I want to yell at them and sometimes I want to hug them, but always, I want to know their story. Made my heart clench and my breath catch. I can’t wait for the next chapter of the Raje family.” – Nalini Singh, New York Times Bestseller

“Dev has a gorgeous lyric quality to her writing voice that she somehow manages to blend seamlessly with sharp humor and comedy, and I absolutely loved it. I really enjoyed meeting the Raje family—a truly delightful read.” – Suzanne Brockmann, New York Times Bestseller

“A vibrant multicultural feast written with a taste for the true nature of the American stew–not a mush of indecipherable flavors but a celebration of its many ingredients. Sonali Dev is a fresh, unique, and wise voice in women’s fiction.”
—Barbara O’Neal, The Art of Inheriting Secrets

“This sumptuous novel is rich with complicated personal and family conflicts, mouthwatering food and the contrast of wealthy vs. modest in a sophisticated urban setting. Dev has a well-deserved reputation for excellence in multicultural women’s fiction and fans are certain to love this latest.” – Shelf Awareness

Signup for news and special offers!